What is Generation MLM Plan?

The Generation MLM Plan or MLM Generation Plan is an MLM Business plan based on profit sharing marketing Business. It is a type of MLM compensation plan followed by the different network marketing companies out there.

How does MLM Generation Plan work?

A generation is a whole volume from upline to downline (this includes people with the same and different ranks). The technical working principle of this MLM Plan can be described using the following example:

Assume 16 levels, consisting of only 4 generations. The amount you can get will be more in the case of the first generation and will be getting reduced for the following generations respectively. Let’s make it more clear, if you pay 10% on your very first generation, it will only be 6% on the second, 4% on the third generation, and 2% on the fourth. 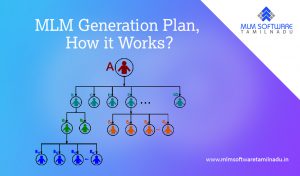 Generation MLM Plan is a great plan with a lot of income earning possibilities. It allows the members of the company to be paid for many levels deep. In this type of MLM plan, every new member recruited is placed at the first level of the sponsor as we have discussed above. A Generation is the people in your downline, including yourself, who might have either the same rank as yours or higher rank.

Every single member can also recruit an unlimited number of distributors under them. The major highlight of MLM generation Plan is that it grows horizontally and the flow is from left to right which is precisely the opposite to other compensation plans like Unilevel, Binary MLM Plan, Matrix MLM Plan, etc.

There are also a lot of benefits for MLM Generation Plan when compared to its counterparts, which will be discussed below.

All the distributors in the network will have the same earning benefits, if they are ready to work hard. Everyone from the sponsor to his downline members can reap the profits generated by the MLM company!

This MLM plan follows a simple structure, and it is effortless to understand even for the entire newcomers.

This plan allows you to achieve massive success if you are working in a well organized manner and working hard.